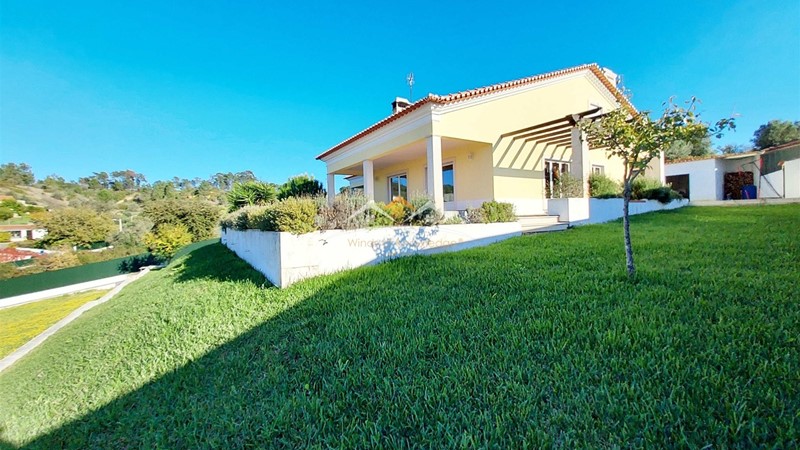 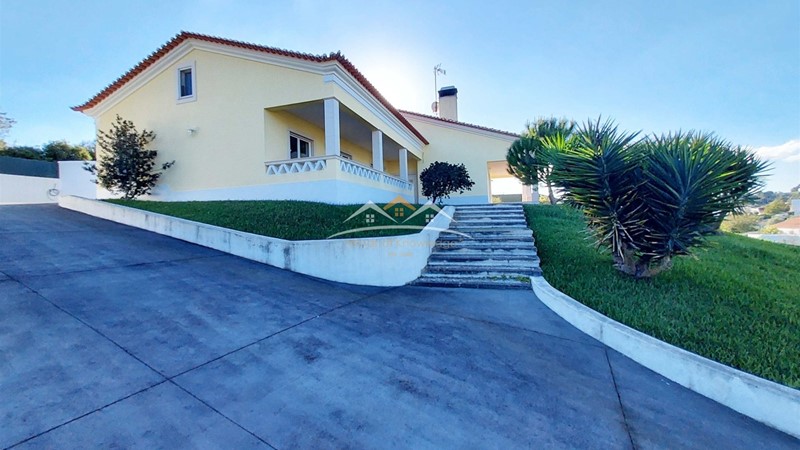 Single storey house, designed so that all the features of a family were ensured in everyday life, making the experience calm and peaceful.
The entire space was designed so that all divisions have plenty of natural light, and direct access to long terraces that are contemplated by an unparalleled view.
The villa is developed in several spaces, in the day area a social area with a large living room and a kitchen with island to enjoy family moments. The entrance hall leads us to the bedroom area through an extensive corridor with natural light that invades this space through two windows facing the back of the house.
In the bedroom area we find 3 bedrooms, all with fitted wardrobes, one of which is also a generously sized suite.
Returning to the entrance hall, a wooden staircase leads us to the upper area intended for games and various games, as well as various storage spaces and a service WC.
Natural light continues to make its presence felt.
On the outside, we will come across several spaces intended for various functions.
At the back of the house we find a covered parking for two cars, a living space with a barbecue and a storage area.
All the free space for games and fun for the little ones should be highlighted.
All around the house the extensive porches were designed for spaces of rest and contemplation of nature as well as the surrounding garden.
On another level there is also a land with several species of fruit trees.
It is worth mentioning the existence of air conditioning, fireplace with stove, pre-installation of solar panel, automatic irrigation, automatic gate and the so traditional Portuguese sidewalk.
All the details with which it was designed mark the identity of this house.

Some notes about Tomar:
Located just 10 minutes away, the Castelo do Bode dam retains the water of the Zêzere River on the limits of the municipality of Tomar and allows the practice of leisure activities and water sports, such as water skiing, wakeboarding, sailing, rowing, canoeing, windsurfing. , kayaks, fishing and swimming. With more than 60 km in length, Albufeira de Castelo do Bode is the second largest watershed in the country.

The city has several historical monuments, including the Convent of Christ, declared a World Heritage Site, the Church of São João Baptista, the Church of Santa Maria dos Olivais (where the remains of Gualdim Pais, Templar master and founder of the City.)
As well as the Chapel of Nossa Senhora da Conceição - being built as a royal pantheon. There is also the Convento de São Francisco, which has a Mannerist chapel, and the Convento de Santa Iria, and finally, the Ermida de São Gregório, which has a circular architectural structure.

Founded by D. Gualdim Pais in 1160, Tomar was the seat of the Orders of the Temple and of Christ and had Infante D. Henrique as one of those responsible for its growth.

In 1983, UNESCO recognized the Templar Castle - Convent of Christ as a World Heritage Site and in the early 1990s the first steps were taken towards the recovery and consolidation of the Historic Center.
The plan of the medieval city (historical area) is organized orthogonally in a layout attributed to Infante D. Henrique. The center, where the Town Hall and the Mother Church are located, is Praça da República, from which the main public and religious buildings radiate: to the south, the Synagogue, the former Hospital da Misericórdia, the Convento de S. Francisco and the old Rossio da Vila; to the north, the chapels of S. Gregório and Senhora da Piedade and the old Convent of Anunciada; to the west, the Castle Hill, the Chapel of Nossa Senhora da Conceição and the Convent of Christ; to the east, the medieval Bridge, the old Moagens and Moinhos da Vila, the Convento de Santa Iria, the exit to the Church of Santa Maria do Olival.